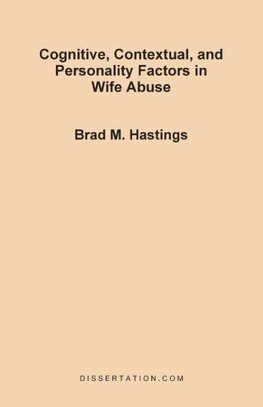 This study is designed to show how personality dispositions and cognitive variables may combine with social norms to influence wife abuse. Prior research examining the role of individual differences in wife abuse has been sparse, unsystematic, and appear... Viac o knihe

This study is designed to show how personality dispositions and cognitive variables may combine with social norms to influence wife abuse. Prior research examining the role of individual differences in wife abuse has been sparse, unsystematic, and appear questionable for two reasons.

First, these studies have not considered that contextual norms and cognitive variables are likely to interact with dispositional variables to either facilitate or discourage abuse.
Second, the theoretical relationship between dispositional variables and macrolevel approaches (i.e. feminist and sociological) has not been investigated. How demographic variables, contextual norms, and individual differences interact may have important implications for the study of wife abuse.
The present project addresses these issues by focusing on a description of the relationship between personality (authoritarianism & sex-role attitudes), cognitive variables (self-consciousness & the hostile attribution bias), contextual norms (military experience & regional background) and wife abuse.
149 males completed a questionnaire containing the Conflict Tactics Scale, RWA scale, Self-Consciousness Scale, Adversarial Sexual Beliefs Scale, and the Attitudes Toward Women Scale. Furthermore, subjects responded to a variety of demographic items designed to assess income level, age, regional background, alcohol consumption, educational level, and military experience.
Results suggest three principal conclusions. First, they show that the hostile attributional bias is the most powerful predictor of verbal and physical abuse. Analyses consistently indicated that subjects possessing hostile attributions toward women are the most likely to verbally and physically abuse their present partner.
Second, the contextual norms and demographics emphasized in past models of abuse were found to interact with personality and cognitive variables. The effect of military experience, Southerness, and alcohol use were mediated by personality and cognitive variables. Finally, the present results are consistent with past studies showing that abusers consume more alcohol, are younger, and earn less than non-abusers. Insofar as the results show significant relationships between relevant of cognitive, personality, and contextual factors, they provide a new, more accurate description of the problem, and may allow more effective forms of prediction, intervention and treatment.