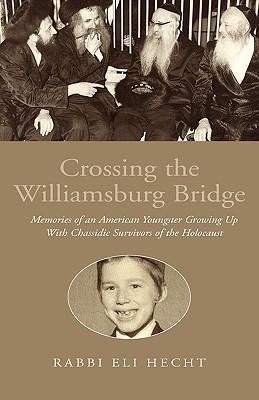 By way of introducing my readers to a special world, often known only to the orthodox Chassidic Jewish community, I have selected to share my experiences as an eight-year-old American boy.
I am the third of nine children, the oldest boy and... Viac o knihe

By way of introducing my readers to a special world, often known only to the orthodox Chassidic Jewish community, I have selected to share my experiences as an eight-year-old American boy.
I am the third of nine children, the oldest boy and named after my deeply Chassidic great-grandfather, Eliyahu. It was thought that in order for me to give honor to his name I should be exposed to the lifestyle he and his family lived.
As a young child I was moved from a modern American orthodox home to my grandparents' home located in Williamsburg, Brooklyn, New York. There I met a new type of Jew, Hungarian Jews, refugees from Europe. Many had their children born in "displaced person camps." They had just arrived with their families to New York after a hard-earned escape from the Russian suppression of Hungary in 1957.
While living with my grandparents, called Upa and Uma, I learned how to live and dress in a Chassidic lifestyle. I learned to love my teacher, called Rebbe, and my classmates.
In the 1950s, almost all of my classmates were children of the infamous Auschwitz deportees from Hungary. Most teachers had branded tattooed numbers on their arm, physical reminders of inhuman cruelties.
I remember visiting a family with my Uma, and being told by the mother, "How lucky you are yingela, sonny-boy, that you have a father, a mother, a brother, a sister, uncles, aunts and even grandparents. The only thing I have left from Germany is this!" She shoved her arm with the blue numbers in front of me.
Other times, my Jewish teacher, a survivor of the camps, would cry in class, thinking of the suffering he and his family had experienced. Many of the school children were from second marriages. Either their father's or mother's first spouse had been killed. It wasn't uncommon for children to have half brothers and sisters who were 10 or 15 years older than they.
Being a fourth generation American living in Williamsburg with survivors of co

1968 Year That Rocked the World