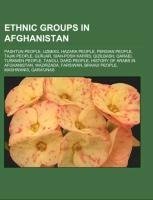 Source: Wikipedia. Pages: 65. Chapters: Pashtun people, Uzbeks, Hazara people, Persian people, Tajik people, Gurjar, Siah-Posh Kafirs, Qizilbash, Qaraei, Turkmen people, Tanoli, Dard people, History of Arabs in Afghanistan, Wazirzada, Farsiwan, Brahui people, Mashwanis, Qara'unas, Durrani, Kasi, Hindki, Kata people, Armenians in Afghanistan, Niazi, Pakistanis in Afghanistan, Pashai people, Indians in Afghanistan, Kom people, Russians in Afghanistan, Gardezi, Zagar Mengal, Damanis, Safed-Posh Kaffirs, Tokhi, Juggi, Jot, Javanshir Qizilbash, Turkmun, Ansarlu, Eastern Iranian peoples, Turks in Afghanistan, Katawar, Ibrahimkhil, Kubdani, Afghan Kypchaks, Zargari people, Abubakar. Excerpt: Pashtuns (Pashto: , , also rendered as Pushtuns, Pakhtuns, Pukhtuns), also known as ethnic Afghans (in Persian: ) or in South Asia as Pathans (in Urdu: ), are an Eastern Iranian ethnic group with populations primarily in Afghanistan and northwestern Pakistan, which includes Khyber-Pakhtunkhwa, Federally Administered Tribal Areas (FATA) and Balochistan. The Pashtuns are typically characterized by their usage of the Pashto language and practice of Pashtunwali, a traditional set of ethics guiding individual and communal conduct. Their true origin is unclear but historians have come across references to a people called Paktha (Pactyans) between the 2nd and the 1st millennium BC, who may be the early ancestors of Pashtuns. Since the 3rd century AD and onward, they are mostly referred to by the ethnonym "Afghan".. Often characterized as a warrior and martial race, they have a fabled past especially after their conversion to the faith of Islam. Their turbulent history is spread amongst various countries of South Asia, especially Afghanistan which has been their traditional seat of power. During the Delhi Sultanate era, many Pashtun emperors (sultans) ruled the Indian subcontinent. Other Pashtuns defeated the Safavid Persians and the Mughal Empire before obtaining an independent state in the early-18th century, which began with a successful revolution by the Hotaki dynasty followed by conquests by Ahmad Shah Durrani. Pashtuns played a vital role during the Great Game from the 19th century to the 20th century as they were caught between the imperialist designs of the British and Russian empires. For over 300 years, they reigned as the dominant ethnic group in Afghanistan with nearly all rulers being Pashtun. More recently, the Pashtuns gained global attention during the 1980s Soviet war in Afghanistan and with the rise of the Taliban, since they are the main ethnic contingent in the movement. Pashtuns are also an important community in Pakistan, where they have attained the