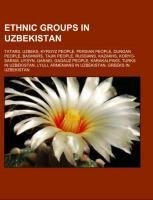 Source: Wikipedia. Pages: 57. Chapters: Tatars, Uzbeks, Kyrgyz people, Persian people, Dungan people, Bashkirs, Tajik people, Russians, Kazakhs, Koryo-saram, Uysyn, Qaraei, Gagauz people, Karakalpaks, Turks in Uzbekistan, Lyuli, Armenians in Uzbekistan, Greeks in Uzbekistan, Chagatai people, Kashgartsy, Kharduri people. Excerpt: The Persian people are part of the Iranian peoples who speak the modern Persian language (Farsi) and closely akin Iranian dialects and languages. The origin of the ethnic Iranian/Persian peoples are traced to the Ancient Iranian peoples, who were part of the ancient Indo-Iranians and themselves part of the greater Indo-European linguistic family. The synonymous usage of Iranian and Persian has persisted over the centuries although some modern Western sources use Iranic/Iranian as a wider term that includes the term Persian as well as related Iranian languages and ethnic groups. However, these terms have been used both synonymously as well as in a complementary fashion since ancient times; as the Ancient Iranian peoples such as the Old Persians, Medes, Bactrians, Parthians and Avesta peoples considered themselves to be part of the greater Iranian ethnic stock. The term Persian translates to "from or of Persis" which is a region north of the Persian Gulf located in Pars, Iran. It was from this region that Cyrus the Great the founder of the Achaemenid empire, united all other Iranian empires (such as the Medes and the Elamites), and expanded the Persian cultural and social influences by incorporating the Babylonian empire, and the Lydian empire. Although not the first Iranian empire, the Achaemenid empire is the first Persian empire well recognized by Greek and Persian historians for its massive cultural, military and social influences going as far as Athens, Egypt, and Libya. Besides modern Iran/Persia, ethnic Persians are also found in Central Asia (Afghanistan, Tajikistan, Uzbekistan) and are usually called "Tajiks" and "Farsiwans". Other closely related Iranian languages and dialects to modern Persian (Parsi-ye Dari is one of the varieties of Persian/Iranian but due to its widespread usage as the most common Iranian language, it became synonymous with Persian), which derive from Western Middle Iranian languages, such as the Luri, Gilaki, Mazandarani, Talyshi, Tat-P