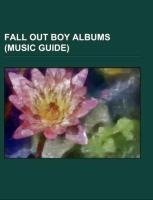 Source: Wikipedia. Commentary (music and lyrics not included). Pages: 27. Chapters: America's Suitehearts: Remixed, Retouched, Rehabbed and Retoxed, Believers Never Die - Greatest Hits, Fall Out Boy's Evening Out with Your Girlfriend, Folie à Deux (album), From Under the Cork Tree, Infinity on High, Leaked in London, Project Rocket / Fall Out Boy, Take This to Your Grave. Excerpt: Infinity on High is the fourth studio album by American rock band Fall Out Boy, released on February 5, 2007 by Island Records as the follow-up to the band's commercially successful 2005 album From Under the Cork Tree. Pre-production began in the group's hometown of Chicago, where writing and rehearsal sessions took place. It was recorded from July to October 2006 at the Pass Studios in Los Angeles, California and mixed at the Paramount Recording Studios in Hollywood. The music was composed by lead singer and guitarist Patrick Stump and the lyrics were penned by bassist Pete Wentz. The album features collaborations with new producers and guest artists such as Babyface and Jay-Z, and sees the band experimenting with musical genres other than pop punk including R&B, soul, and flamenco. The group also utilized instruments such as horns, violins and pianos, which had not been used on previous releases. As reported by Billboard, Fall Out Boy "drifts further from its hardcore punk roots to write increasingly accessible pop tunes," a slight departure from the group's previous sound. Critics felt that the lyrics served as a response to the band's rise to fame. The group embarked on several tours to promote the album, including the Friends or Enemies Tour, the Honda Civic Tour, and the Young Wild Things Tour. In the wake of the album's leak on the internet, the band included a download code for Leaked in London, a live extended play, with each purchase made during the first week of its initial release. Infinity on High debuted at number one on the U.S. Billboard 200, selling 260,000 copies in its first week, making it Fall Out Boy's first number one album and second top ten effort. It also reached number one in New Zealand and opened inside the top five worldwide in countries including Canada, the United Kingdom and Australia. Infinity on High has sold over two million units worldwide. Four of the album's fourteen songs were released as singles, of which three charted on the