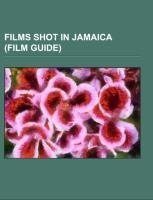 Source: Wikipedia. Commentary (films not included). Pages: 38. Chapters: 20,000 Leagues Under the Sea (1954 film), A High Wind in Jamaica (film), Club Paradise, Come Spy with Me (film), Dark of the Sun, Dr. No (film), In Like Flint, Knight and Day, Land of Look Behind, License to Wed, Life and Debt, Live and Let Die (film), Marked for Death, Our Man in Jamaica, Papillon (film), Passionate Summer, Scam (film), Smile Orange (film), The Blue Lagoon (1980 film), The Harder They Come, Wide Sargasso Sea (1993 film). Excerpt: Dr. No is a 1962 British spy film, starring Sean Connery; it is the first James Bond film. Based on the 1958 Ian Fleming novel of the same name, it was adapted by Richard Maibaum, Johanna Harwood, and Berkely Mather and was directed by Terence Young. The film was produced by Harry Saltzman and Albert R. Broccoli, a partnership that would continue until 1975. In the film, James Bond is sent to Jamaica to investigate the death of a fellow British agent. The trail leads him to the underground base of Dr. Julius No, who is plotting to disrupt an early American manned space launch with a radio beam weapon. Although the first of the Bond books to be made into a film, Dr. No was not the first of Fleming's novels, Casino Royale being the debut for the character; however, the film makes a few references to threads from earlier books. Dr. No was produced with a low budget, and was a financial success. While critical reaction at release was mixed, over time the film received a reputation as one of the franchise's best instalments. The film was the first of a successful series of 23 Bond films. Dr. No also launched a genre of "secret agent" films that flourished in the 1960s. The film also spawned a spin-off comic book and soundtrack album as part of its promotion and marketing. Many of the iconic aspects of a typical James Bond film were established in Dr. No: the film begins with an introduction to the character through the view of a gun barrel and a highly stylised main title sequence, both created by Maurice Binder. Production designer Ken Adam established an elaborate visual style that is one of the hallmarks of the Bond film series. John Strangways, the British Intelligence (SIS) Station Chief in Jamaica, is ambushed and killed, and his body taken by a trio of assassins known as the "Three Blind Mice". In response, British agent James Bond-also known as 007-is summoned to the office of his superior, M. Bond is briefed to investigate Strangways' disappearance and to determ