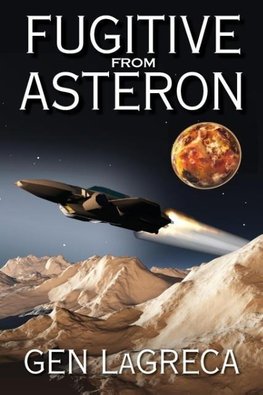 In a grim world of tyranny, one man struggles to defy the norms. In a place where life is cheap, he prizes his. Where work is drudgery, he gets the one job he wants. Where passion is extinct, he loves a beautiful woman. Then he loses everything. Arial... Viac o knihe

In a grim world of tyranny, one man struggles to defy the norms. In a place where life is cheap, he prizes his. Where work is drudgery, he gets the one job he wants. Where passion is extinct, he loves a beautiful woman. Then he loses everything. Arial is an ace pilot who is imprisoned for sedition by Feran, the brutal ruler of Planet Asteron. The young rebel is pushed to desperation when he's sentenced to undergo an unbearable punishment. Feran is about to embark on a vital mission that is shrouded in the highest secrecy. But in a death-defying escape, Arial steals his ruler's spacecraft, foiling his plans. The ship takes the fugitive on Feran's pre-programmed course, with a mysterious cargo aboard. Arial's life is about to change forever-and with it, the fate of two planets. During the stormy events that seize his life, Arial is drawn to two women. Reevah is the proud Asteronian whose strong will sets her apart in a society where all must obey. She lives for her stolen moments with Arial. But will her love for him seal her doom? Kristin is the high-spirited woman of another world who falls in love with the handsome stranger who lands on her planet. But will she discover the secret of his past that will make him her mortal enemy? FUGITIVE FROM ASTERON takes you on a journey to two opposite worlds on the brink of a collision. It's a tale of exotic adventure, of first love, of grit and courage, of harrowing danger, and of a shocking mystery unfolding. At heart, it's the story of a young man's struggle to heal the wounds of a brutal past, to learn what makes human existence possible, and to claim his own life.

Genevieve (Gen) LaGreca writes novels with innovative plots, strong romance, and themes that glorify individual freedom and independence. She is one of the successful new indie authors whose novels have topped the charts in the popular ebook format. Her two previously published novels, NOBLE VISION and A DREAM OF DARING, have been Amazon Kindle Best Sellers. Among other awards, she has won Foreword Book of the Year awards for both of her previous novels, and NOBLE VISION also was a finalist in the coveted Writer's Digest International Book Awards contest. Gen's three novels are available in both paperback and ebook format.

The Science of Discworld II