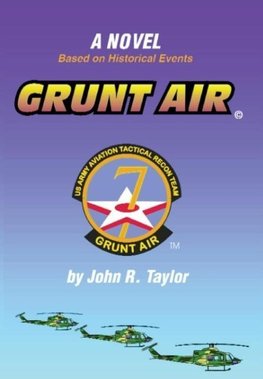 "Grunt Air will raise awareness about the many missing POWs, some who are still missing..." Doug Alberts, Pilot, quoted from The Lakewood People

"John R. Taylor had me sitting on the edge of my seat a few times, laughing and crying. He is an amazing... Viac o knihe

"Grunt Air will raise awareness about the many missing POWs, some who are still missing..." Doug Alberts, Pilot, quoted from The Lakewood People

"John R. Taylor had me sitting on the edge of my seat a few times, laughing and crying. He is an amazing author."-A Reviewer

Grunt Air tells the story of an elite Air Force helicopter unit used for the secret rescue of American pilots shot down during the Vietnam War who were being held and tortured by the enemy in Laos and Cambodia. Mid-1971 saw the Vietnam peace talks in Paris going nowhere. Eager for an end to the war, the U.S. halted POW rescue missions that might encumber the negotiations. Washington did, however, authorize military survey teams to collect crash site information. The 7th Air Force used this loophole to create a clandestine POW rescue operation. Nicknamed "Grunt Air" by the Air Force boys, they flew missions daily, disguised as a purely technical team, at one point even rescuing the wife of a CIA agent trapped behind enemy lines. Based on historical events from the unheralded fronts of the Vietnam War, GRUNT AIR reveals the treacherous, sometimes humorous, often deadly campaigns of a distinguished Air Force General, a hellcat Army Captain, and two feisty Texas housewives, all hell bent on rescuing lives imperiled by war, diplomacy, and bureaucracy.

John R. "Rick" Taylor is a decorated Vietnam War veteran who served in the U.S. Army for ten years. His overseas assignments included Germany, Korea, Panama, and Southeast Asia while working with Aviation, Military Intelligence, and Air Defense units. In the early and mid-80s, Taylor was an activist for the full accountability of American and Allied POWs and MIAs unaccounted for in Southeast Asia. An oil and gas executive today, Taylor has returned to post-war Vietnam to engage in petroleum evaluation in the Mekong Delta. He has met with many former Vietnamese combat leaders, including the venerable North Vietnamese military architect of the Vietnam War, General Nguyen Vo Giap. Taylor started flying at age 13, later to become an Army Aviator and Captain whose service to his country has been distinguished by air combat missions in Southeast Asia. Taylor currently lives in Texas and still enjoys a love of flying.