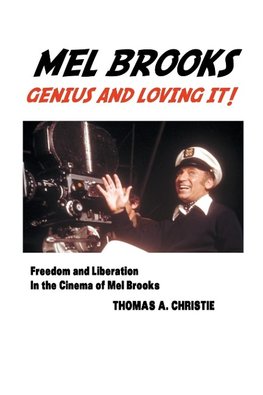 Mel Brooks: Genius and Loving It
Freedom and Liberation in the Cinema of Mel Brooks

by Thomas A. Christie


Beloved by his fans and equally praised and derided by the critics... Viac o knihe

Mel Brooks: Genius and Loving It
Freedom and Liberation in the Cinema of Mel Brooks

by Thomas A. Christie


Beloved by his fans and equally praised and derided by the critics many times throughout his long career, Mel Brooks is a creative polymath, a comic talent to be reckoned with - influential, fearless and totally unafraid of his detractors. Yet whether you admire his work or not, one thing remains absolutely certain: this larger-than-life character is a very difficult man to ignore.

Mel Brooks has been immortalised as the definitive maestro of big-screen bad taste, a pioneer of the cinematic spoof (and very influential, too - you can see Brooks' influence in many places today). But throughout his film-making career, his ardent championship of personal liberty is too often neglected. Examining all eleven of the movies that Brooks directed, from The Producers (1968) to Dracula: Dead and Loving It (1995), this book examines the way that this most distinctive of cinematic visionaries came to earnestly and vigourously defend freedom in all of its forms, whether creative, individual, social, cultural or political.

As well as famous films like The Producers ('If you've got it, flaunt it, baby!'), Blazing Saddles, Young Frankenstein ('Frankenstein?' 'Fronkensteen'), this book also looks at lesser-known Brooks movies such as 12 Chairs, Silent Movie and Life Stinks.

Includes a detailed filmography, movie statistics, examples of critical opinions, a guide to further reading, and a bibliography.

Fully illustrated, with stills from all of Mel Brooks' movies.


'Thomas Christie's scholarship is as always immaculate. Full marks to him for another informative, well written and erudite guide to a neglected director and episode of film history.'