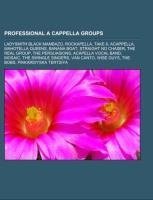 Source: Wikipedia. Pages: 45. Chapters: Ladysmith Black Mambazo, Rockapella, Take 6, Acappella, Mahotella Queens, Banana Boat, Straight No Chaser, The Real Group, The Persuasions, Acapella Vocal Band, Mosaic, The Swingle Singers, Van Canto, Wise Guys, The Bobs, Pikkardiyska Tertsiya, The Essentials, Ambassadors of Harmony, Cantabile, Key Elements, Vocaldente, The Nylons, A'Cappella ExpreSSS, OC Times, Vocal Spectrum, Naturally 7, List of professional a cappella groups, Crossroads, Max Q, Tonic Sol-fa, Les Double Six, The Glue, Rajaton, The Voca People, Ball in the House, The Suntones, Bluegrass Student Union, Blue Jupiter, Toxic Audio, Gas House Gang, Acoustix, Da Vinci's Notebook, Vocation, Cosmos, The Ritz, SALT, Pandemonio, Joker's Wild, Gotcha!, Four Voices, Michigan Jake, FRED, Club for Five, Platinum, Realtime, Keepsake, The Confederates, Power Play, Four Bettys, Rescue, Vocal Sampling, Moxie Ladies, Zing, Riltons Vänner, M-pact. Excerpt: Ladysmith Black Mambazo is a male choral group from South Africa that sings in the vocal styles of isicathamiya and mbube. They rose to worldwide prominence as a result of singing with Paul Simon on his album, Graceland and have won multiple awards, including three Grammy Awards. They were formed by Joseph Shabalala in 1960 and later became one of South Africa's most prolific recording artists, with their releases receiving gold and platinum disc honors. The group has now become a mobile academy, teaching people about South Africa and its culture. Joseph Shabalala formed Ladysmith Black Mambazo because of a series of dreams he had in 1964, in which he heard certain isicathamiya harmonies (isicathamiya being the traditional music of the Zulu people). Following their local success at wedding ceremonies and other gatherings, Shabalala entered them into isicathamiya competitions. The group was described as 'so good' that they were eventually forbidden to enter the competitions, but welcomed to entertain at them. Although they had been recognised as an isicathamiya group in 1964, they had been singing together since the early 1950s. They released their first album, Amabutho, in 1973. The album, along with many other releases by the group, received gold disc certification. Ladysmith Black Mambazo's collaboration with Paul Simon in 1986 paved the way for international releases, making them widely known across the world. The first incarnation of Ladysmith Black Mambazo was "Ezimnyama" ("The Black Ones"), formed by Shabalala in December 1960. The members of the group were relatives (mostly brothers and cousins) of Shabalala, with many having sung with him while he was growing up on the farm where he was born. Although the group did sing well together and captured the sound of cothoza mfana (tip toe boys, a 1960s slang term for isicathamiya) and mbube groups of the time, they were unknown outside of the Ladysmith district. In 1964, Shabalala had a series of recurring dreams d