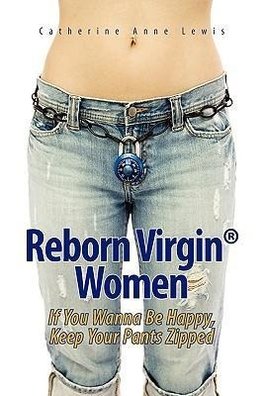 It's never too late to become a virgin. Really. Whether you lost it fifty minutes ago or fifty years ago, you can mentally reclaim your virginity right now. When you eliminate sex from the dating equation, the emotional and physical hazards of casual... Viac o knihe

It's never too late to become a virgin. Really. Whether you lost it fifty minutes ago or fifty years ago, you can mentally reclaim your virginity right now. When you eliminate sex from the dating equation, the emotional and physical hazards of casual sex can't affect you. Learn to have frank discussions with your mate, reaching compromise and working together to problem solve before the differences break apart your vows, your kids, and your home. If you desire a real relationship that can blossom into a successful, monogamous marriage, then forgo "safe sex" for safe dating, as outlined in Reborn Virgin® Women.If You Wanna Be Happy, Keep Your Pants Zipped!.
An important theme of the Reborn Virgin® philosophy is that non-virgins don't have to continue having sex. Anyone can become virgin again. Any life can be reclaimed no matter how sullied or lost. It only takes faith in you; that you are worthy to act like a virgin. It's difficult to feel like a virgin when you've already had sex. You might feel dirty or tainted, and perhaps you feel as though you might as well continue having sex since you've had it before. But by giving yourself a title, Reborn Virgin®, you gain permission to act like a virgin again. The title alters how you feel about yourself, and sets you up to act like a virgin. You don't have to have sex just because you've had it before. You get another chance, a fresh start. Everyone deserves another chance, everyone.
Don't you think that's a compassionate way to think?
Men and women have sex on the third date because they don't want to keep their pants zipped, use their noggins, and experience intimacy through conversation, revelation and psychological exploration. It takes vulnerability and honesty to create a real bond. When people hop in the sack early on, they forgo any notion of being close. It stunts their growth as a couple, and shuts them off from each other. It does not bring them together more quickly. There is no flourishing of the union with casual sex, only preservation of status quo. No one wants to continue for a few months or even a few years on a "third-date" level. Most people look for a relationship to mature, but those engaging in casual sex will never see that happen.
Without the distraction of sex, single couples find they are much better able to determine their life-long compatibility. They can build marriages that thrive as well as survive. Long before the wedding vows, abstinent men and women debate and resolve important and potentially destructive issues such as finances, in-laws, religious practices, child rearing, and other topics that can drive even the most promising marriages to divorce court. Keep your budget on track with abstinence by purchasing a luxurious tenth-year anniversary cruise, not your divorce lawyer's vacation home.
Don't be blinded by the temporary heat of carnal passion, and never confuse sexual intimacy with emotional intimacy. When you have frank discussions with your mate, you learn to reach compromise and work together to problem solve before differences break apart your vows, your kids, and your home. Want to make your dreams a reality? Read Reborn Virgin® Women.If You Wanna Be Happy, Keep Your Pants Zipped!