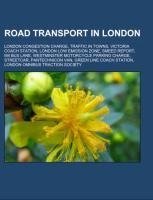 Source: Wikipedia. Pages: 26. Chapters: London congestion charge, Traffic in Towns, Victoria Coach Station, London low emission zone, Smeed Report, M4 bus lane, Westminster motorcycle parking charge, Streetcar, Pantechnicon van, Green Line Coach Station, London Omnibus Traction Society, KenBuster. Excerpt: The London congestion charge is a fee for motorists travelling within the Congestion Charge Zone (CCZ), a traffic area in London. The charge aims to reduce congestion, and raise investment funds for London's transport system. The zone was introduced in central London on 17 February 2003, and extended into parts of west London on 19 February 2007. Though not the first scheme of its kind in the United Kingdom, it was the largest when introduced, and it remains one of the largest in the world. Several cities around the world have referenced London's congestion charge when considering their own schemes. A payment of £10 is required each day for each vehicle, which travels within the zone between 07:00 and 18:00 (Monday-Friday only); a penalty of between £60 and £180 is levied for non-payment. On 4 January 2011 several changes were implemented based on the public consultation conducted in 2008, which included the removal of the Western Extension, a charge increase from £8 to £10, and the introduction of an automated payment system. Transport for London (TfL) administers the charge; Capita Group operated it under contract until 31 October 2009, and IBM took over on 1 November 2009. The system is mostly run on an automatic basis using Automatic Number Plate Recognition. The boundary of the zone, as of 19 February 2007, starts at the northern end of Vauxhall Bridge and (travelling in a clockwise direction) heads along the northern bank of the River Thames as Grosvenor Road, the Chelsea Embankment and Cheyne Walk. From there, it heads north, along the eastern edges of the Kensington and Earl's Court one-way systems, part of the A3220, with the roads in between charged, before continuing to the A40 Westway as the Holland Road and the West Cross Route. The boundary then includes parts of North Kensington, but the actual boundary is defined by the West London Line railway track, which runs between Latimer Road (inside the zone) and Wood Lane (outside the zone), until Scrubs Lan