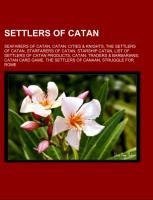 Source: Wikipedia. Pages: 30. Chapters: Seafarers of Catan, Catan: Cities & Knights, The Settlers of Catan, Starfarers of Catan, Starship Catan, List of Settlers of Catan products, Catan: Traders & Barbarians, Catan Card Game, The Settlers of Canaan, Struggle for Rome, Catan Geographies: Germany, Elasund, Catan Historical Scenarios II: Troy and Great Wall, Catan Historical Scenarios I: Alexander and Cheops, The Rivals for Catan, Candamir: The First Settlers, The Settlers of Zarahemla, The Kids of Catan, Settlers of America: Trails to Rails, Settlers of the Stone Age, Catan Dice Game. Excerpt: Starfarers of Catan is a multiplayer board game loosely based on the Settlers of Catan series of games. It was created by Klaus Teuber as an official spin-off and is distributed by Kosmos in German and Mayfair Games in English. Originally intended for three to four players, Kosmos and Mayfair released an expansion to allow up to two additional players. Starfarers takes place in a futuristic setting where, in the distant future, the human race has perfected a method to travel faster than light. As a result, it settles on a distant star system known as Catan, where it encounters five peaceful alien races: the Green Folk, the Scientists, the Merchants, the Diplomats, and the Travelers, as well as an intergalactic council that serves as the diplomatic body in the Catanian sector. The players serve as the role of Catanians operating a fleet that seek to colonize unknown planets in order to ensure the growth of humanity, while maintaining strong ties to these alien races. Although Starfarers uses much of the same game mechanic as Settlers, there are many differences, the most notable of which was the use of a fixed game board and the use of moving ships. Like Settlers, gameplay is mainly played on the intersections of a hexagonal grid. Like other games in the Catan series, the objective of Starfarers is to score a number of Victory Points-in this game, fifteen Victory Points are required to win the game. Unlike other Catan games, however, the fixed board contains a "victory point" track that aids players in keeping track of the scores for all players (so long as it is sufficiently updated). Whereas Settlers is light in terms of equipment due to its modular structure, Starfarers requires a large amount of equipment to play. The fixed board is a noticeable feature of Starfarers. At the beginning, the players have settled the Catanian colonies, represented by planets along the bottom edge of the gameboard. The players must expand to other planets in the middle and on the oth