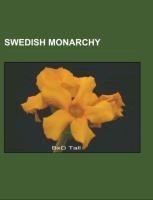 Source: Wikipedia. Pages: 34. Chapters: Ancestry of Carl XVI Gustaf of Sweden, Bevare Gud vår kung, Convention of Moss, Crown of Eric XIV, Duchies in Sweden, Eriksgata, Guadeloupe Fund, John Ambler, Kalmar Union, King in Council (Sweden), Kungssången, Line of succession to the Swedish throne, List of heirs to the Swedish throne, List of Swedish monarchs, Loyal toast, Monarchy of Sweden, Riddarholmen Church, Royal Court of Sweden, Royal mottos of Swedish monarchs, Semi-legendary kings of Sweden, Stones of Mora, Swedish Act of Succession, Swedish Royal Regalia, Thomas Sjöberg (journalist), Uppsala öd. Excerpt: This is a list of Swedish monarchs, that is, the Kings and ruling Queens of Sweden, including regents and viceroys of the Kalmar Union, up to the present time. The earliest record of what is generally considered to be a Swedish king appears in Tacitus' work Germania, c. 100 AD (the king of the Suiones). However, due to scant and unreliable sources before the 11th century, lists of succession traditionally start in the 10th century with king Olof Skötkonung, and his father Eric the Victorious, who also were the first Swedish kings to be baptized. There are, however, lists of Swedish pagan monarchs with far older dates, but in many cases these kings appear in sources of disputed historical reliability. These records notably deal with the legendary House of Yngling, and based on the Danish chronicler Saxo Grammaticus, Erik Segersäll and Olof Skötkonung have often been classified as belonging to the Swedish house of Ynglings. However, according to Icelandic sources this line of kings was broken (see Ingjald and Ivar Vidfamne), and trace them back to Sigurd Ring and Ragnar Lodbrok (whom Saxo, on the other hand, considered to belong to the House of Yngling). As there is no evidence that Eric and Olof ever used the Yngling name themselves, modern historians instead refer to their family as the House of Munsö, the Old Dynasty or the House of Uppsala. In the 16th century, Johannes Magnus constructed a mythical line of Swedish kings, beginning with Magog, the son of Japheth, to demonstrate the antiquity of the Swedish throne. On the basis of his list, Eric XIV and Charles IX adopted their high ordinals; previous monarchs with those names are traditionally numbered counting backward from Eric XIV and Charles IX. In contemporary Swedish usage, medieval kings are usually not given any ordinal at all. Sweden has been ruled by queens regnant on three separate occasions: by Margaret (1389-1412), Christina (1632-1654) and Ulrika Eleonora (1718-1720) respectively. In addition to the

Congress, U: Small Business Concerns With the Section 800 Pa