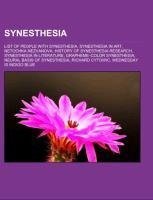 Source: Wikipedia. Pages: 27. Chapters: List of people with synesthesia, Synesthesia in art, Netochka Nezvanova, History of synesthesia research, Synesthesia in literature, Grapheme-color synesthesia, Neural basis of synesthesia, Richard Cytowic, Wednesday Is Indigo Blue, Ordinal linguistic personification, Synesthesia in fiction, American Synesthesia Association, The Man Who Tasted Shapes, Number form, Lexical-gustatory synesthesia, Jacob Isaacson, Chromesthesia, Optophonic Piano, UK Synaesthesia Association, Belgian Synesthesia Association. Excerpt: Synesthesia (also spelled synæsthesia or synaesthesia, plural synesthesiae or synaesthesiae), from the ancient Greek (syn), "together," and (aisthesis), "sensation," is a neurologically based condition in which stimulation of one sensory or cognitive pathway leads to automatic, involuntary experiences in a second sensory or cognitive pathway. People who report such experiences are known as synesthetes. In one common form of synesthesia, known as grapheme ¿ color synesthesia or color-graphemic synesthesia, letters or numbers are perceived as inherently colored, while in ordinal linguistic personification, numbers, days of the week and months of the year evoke personalities. In spatial-sequence, or number form synesthesia, numbers, months of the year, and/or days of the week elicit precise locations in space (for example, 1980 may be "farther away" than 1990), or may have a (three-dimensional) view of a year as a map (clockwise or counterclockwise). Yet another recently identified type, visual motion ¿ sound synesthesia, involves hearing sounds in response to visual motion and flicker. Over 60 types of synesthesia have been reported, but only a fraction have been evaluated by scientific research. Even within one type, synesthetic perceptions vary in intensity and people vary in awareness of their synesthetic perceptions. While cross-sensory metaphors (e.g., "loud shirt," "bitter wind" or "prickly laugh") are sometimes described as "synesthetic", true neurological synesthesia is involuntary. It is estimated that synesthesia could possibly be as prevalent as 1 in 23 persons across its range of variants. Synesthesia runs strongly in families, but the precise mode of inheritance has yet to be ascertained. Synesthesia is also sometimes reported by individuals under the influence of psychedelic drugs, after a stroke, during a temporal lobe epilepsy seizure, or as a result of blindness or deafness. Synesthesia that arises from such non-genetic events is referred to as "adven

The Paradox of Choice

Can I tell you about Eating Disorders?

Harmonic Wealth: The Secret of Attracti

I Am Different from You

On Becoming a Person