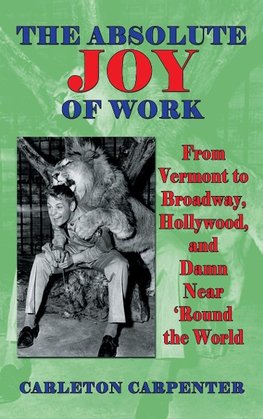 The Absolute Joy of Work

"A marvelously entertaining memoir from a uniquely talented artist in the theatre and movies."

"A marvelously entertaining memoir from a uniquely talented artist in the theatre and movies."

"Carleton Carpenter has led many lives, before and after he duetted on 'Aba Daba Honeymoon'. I'm so glad he has chosen to share those lives with us in this wonderful new book."

"At the movies, Carleton Carpenter was the boyish equivalent of an all-American Fourth of July picnic-wholesome, delightful, and utterly without pretense. The story of his life is equally likeable-candid, funny, and full of joy. For anyone who misses the golden days of Broadway and Hollywood, he shares his show business memories without artifice, phony sentimentality, or any of the usual axes to grind. This book puts a smile on your face and keeps it there."

He's appeared in more than 20 New York stage productions, countless tours around the country, thousands of TV and radio shows, and two dozen films, mostly for MGM-among them such classics as Father of the Bride, Summer Stock, Three Little Words, Lost Boundaries, Fearless Fagan, and Two Weeks With Love. His recordings of "Aba Daba Honeymoon" and "Row, Row, Row" (both with Debbie Reynolds), earned him two Gold Records.