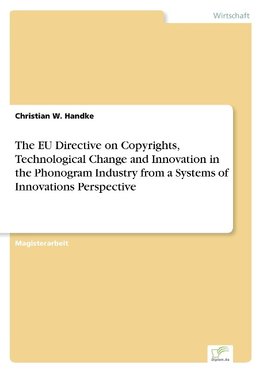 The EU Directive on Copyrights, Technological Change and Innovation in the Phonogram Industry from a Systems of Innovations Perspective

Inhaltsangabe:Abstract:
Cultural industries, like the sector dedicated to the production of media content, have long been marginal in academic research, arguably because they do not fit pure concepts of the economical, the socio-political, nor the cultural.... Viac o knihe

Inhaltsangabe:Abstract:
Cultural industries, like the sector dedicated to the production of media content, have long been marginal in academic research, arguably because they do not fit pure concepts of the economical, the socio-political, nor the cultural. This relative neglect is in stark contrast to the omnipresence of audio-visual media services in many daily lifes, and the cultural and political significance of such information imparted as media content. These information services fulfil crucial functions for communication, education, inspiration, recreation and entertainment.
It also contrasts with the economic dynamism of the sector. In the last two decades, the sector has gone through a ¿wave of mergers and acquisitions during the 1980s and 1990s¿ leading to a ¿concentration of ownership to international corporations¿. The sector is further characterised by technological change, in particular due to the diffusion and development of Information and Communication Technology (ICT) applications. Meanwhile, initial efforts to conduct cultural accounting from the late 1980s onwards provided evidence that the production and distribution of information as media content accounts a) for a significant part of GNP and employment in most industrialised countries, and b) has tended to expand more rapidly than economies as a whole, i.e. has been a source of economic growth and job creation. Not least for EU policy makers, media content came to be seen as one of the growth sectors in a prospective ¿Information Society¿(IS) where digital information networks unfold their benefits in the context of a globalising, competitive economy.
The transition to a new global media landscape that makes full use of ICT and would become one cornerstone of an IS, has the potential to affect competitiveness, change the global division of labour and the division of profits from cultural production. It is not entirely surprising then, that the media sector is in turmoil at the moment. Currently, even some of the triumphant international media conglomerates that emerged out of the ¿wave of mergers¿, are experiencing highly publicised difficulties. At the same time, the expected benefits of the ¿Information Society¿ have not arrived as swiftly as had sometimes been predicted.
These challenges sustain a controversial debate on policy, in particular on the handling of intellectual property rights (IPR). Much of this discourse has crystallised around the music industry and the [...]

Say It With Charts

Ethics in the Economy