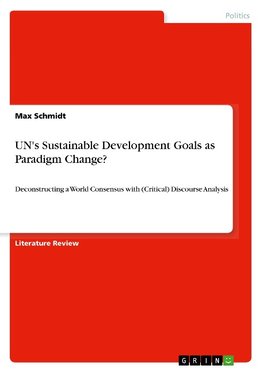 Literature Review from the year 2019 in the subject Politics - Environmental Policy, grade: 1.3, University of Leipzig (Institute of Political Science), course: Application-oriented introduction to qualitative methods of political science, language: English, abstract: This paper strives to provide an overview of the critical academic engagement with the Sustainable Development Goals (SDGs). This literature review is structured as follows: Firstly, a short introduction to the key terms facilitated in this paper will be given: 'development' and its distinction to 'sustainable development'. Secondly, the underlying methodology of critical discourse analysis (CDA) and its differentiation from discourse analysis (DA) will be presented in order to embed the subsequent overview. Finally, some main findings will be compared with the contribution of (C)DA to development studies.

In late 2015, one of the most far-reaching consensuses in the world was unanimously agreed upon by the 193 countries of the United Nations (UN) General Assembly: the Sustainable Development Goals (SDGs). Set out to fulfil ambitious development targets by 2030, ranging from the complete eradication of poverty in all its forms everywhere (Goal 1) to strengthening the Global Partnership for Sustainable Development (SD) (Goal 17), this framework is part of the so-called Post-2015 Development Agenda respectively '2030 Agenda' (eponymous by the main document constituting the SDGs passed by the UN in 2015).

As the intended outcome of this process, which was initiated in 2012, the SDGs are the legitimate successor of the Millenium Development Goals (MDGs), a set of eight goals that were promised to be reached by 2015 by the UN Millenium Declaration (passed in 2000). Facing manifold shortcomings of the MDGs, which were measured by a mere 18 targets, the SDGs were extended to 17 goals measured by 169 targets.

Unsurprisingly and especially regarding their abundance, the SDGs faced harsh critique from most diverse commentators. In one of its issues in March 2015, the internationally renowned weekly newspaper The Economist, for example, portrayed the SDGs as even worse than useless. Due to their presumably bloated nature as a "myriad of top-down targets" (The Economist 2015), they would not only distract from poverty eradication as the potentially most important goal but also overlook the importance of local contexts, ultimately resulting in "cookie-cutter development policies" (Ibid.). However, the majority of publication organs and stakeholders in the international development community did not articulate an equally harsh (and narrow) critique, as the goals of the SDGs seem difficult to contradict - at least on first glance.

The State against Society