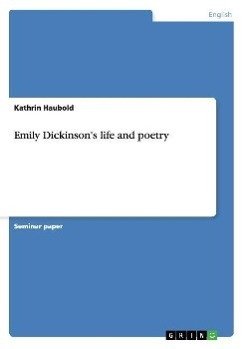 Seminar paper from the year 2001 in the subject American Studies - Literature, grade: 1 (A), University of Frankfurt (Main) (Institute for England and American Studies), course: Emily Dickenson, 22 entries in the bibliography, language: English, abstract: We know much of Dickinson¿s life through her correspondences. She maintained a lifelong correspondence with Susan Dickinson, even though they were next-door neighbors. This correspondence, preserved by Susan, is the source for many of the poet¿s manuscripts. But Emily Dickinson also corresponded with school friends, with her cousins Fanny and Loo Norcross, and with several people of letters, including Samuel Bowles, Dr. and Mrs. J.G. Holland, T.W. Higginson, and Helen Hunt Jackson. The central events, then, of Dickinson¿s life are those that are central to the life of most writers: she wrote. She compiled a manuscript recorded of 1.775 poems, along with many letters. In or around 1858 she began to keep manuscript books of her poetry, the "fascicles", hand-produced and hand-bound. In the early 1860s she produced hundreds of poems each year. In 1864 and 1865, failing eyesight, which impelled her to make two extended visits to Cambridge, Massachusette for medical treatment, slowed her production of manuscipt books. But her production of manuscripts continued at a slower pace until her last illness in 1885-86. Though she wrote hundreds of poems, Dickinson never published a book of poetry. The few poems published during her lifetime were anonymous. The reasons why she never published are still unclear. A myth promoted by William Luce¿s play The Belle of Amherst (1976) is that Higginson discouraged her writing. However, it is propably not the case that Dickinson met with rejection from the literary world. For one thing, Higginson was instrumental in getting her poetry published soon after her death, suggesting, that her reluctance and not his disapproval was the barrier to him doing this earlier. Also, both Bowles and Hunt Jackson arranged for anonymous publication of individual poems by Dickinson during the poet¿s lifetime. At Hunt Jackson¿s suggestion, Thomas Niles of Roberts Brothers publishing house tried to get the poet to submit a volume of poems for publication in 1883; she declined.