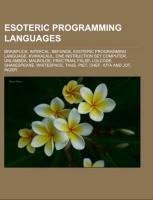 Source: Wikipedia. Pages: 24. Chapters: Brainfuck, INTERCAL, Befunge, Esoteric programming language, Kvikkalkul, One instruction set computer, Unlambda, Malbolge, FRACTRAN, FALSE, LOLCODE, Shakespeare, Whitespace, Thue, Piet, Chef, Iota and Jot, Inger. Excerpt: The brainfuck programming language is an esoteric programming language noted for its extreme minimalism. It is a Turing tarpit, designed to challenge and amuse programmers, and is not suitable for practical use. The name of the language is generally not capitalized except at the start of a sentence, although it is a proper noun. Urban Müller created brainfuck in 1993 with the intention of designing a language which could be implemented with the smallest possible compiler, inspired by the 1024-byte compiler for the FALSE programming language. Several brainfuck compilers have been made smaller than 200 bytes. The classic distribution is Müller's version 2, containing a compiler for the Amiga, an interpreter, example programs, and a readme document. The language consists of eight commands, listed below. A brainfuck program is a sequence of these commands, possibly interspersed with other characters (which are ignored). The commands are executed sequentially, except as noted below; an instruction pointer begins at the first command, and each command it points to is executed, after which it normally moves forward to the next command. The program terminates when the instruction pointer moves past the last command. The brainfuck language uses a simple machine model consisting of the program and instruction pointer, as well as an array of at least 30,000 byte cells initialized to zero; a movable data pointer (initialized to point to the leftmost byte of the array); and two streams of bytes for input and output (most often connected to a keyboard and a monitor respectively, and using the ASCII character encoding). The eight language commands, each consisting of a single character: (Alternatively, the ] command may instead be translated as an unconditional jump to the corresponding match as parentheses usually do: each and vice versa, the between the two. Brainfuck programs can be translated into C using the following substitutions, assuming ptr is of type unsigned char* and

Battistella, E: Sorry About That